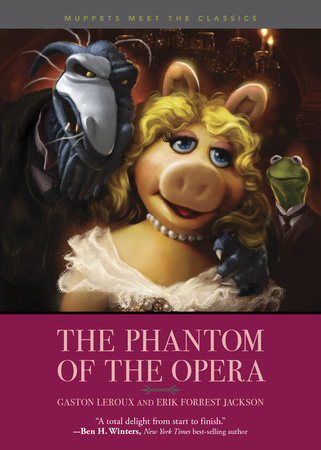 _My brother gave me [this Muppet version of The Phantom of the Opera ](https://www.penguinrandomhouse.com/books/546080/muppets-meet-the-classics-the-phantom-of-the-opera-by-gaston-leroux-and-erik-forrest-jackson-illustrated-by-owen-richardson/) a couple Christmases back, and I have genuinely never felt more seen in my entire life._

Back in June 2019, M. and I visited the Center for Puppetry Arts in Atlanta, GA while accompanying W. on a work trip. They have a whole gallery devoted to Jim Henson’s work. My family has always been a Muppet family, I suppose because my parents had only been married a couple of years when The Muppet Show started airing and I wasn’t born until it had been on the air for four years. I saw it a great deal, so it must have been available in second-run syndication. And then of course there were the movies, which I watched many a time.

This visit to the Center for Puppetry Arts reminded me of my long-standing affection for The Muppets, something I hadn’t thought about overly much since purchasing the Blu-Ray of the 2011 movie The Muppets, which I adore. Truly, coming around a corner from the Sesame Street part of the gallery to the Muppet part of the gallery, I saw Kermit the Frog sitting on a director’s chair in a glass case and it was like seeing an old friend. I think I may actually have said hello to him.

Since that trip, I have slowly been bringing M. into my Muppet obsession. I think it may have begun with this adorable clip of Kermit and a little girl on Sesame Street:

and continued with “Mahna Mahna”:

I’m not sure what order the rest of it all proceeded in, but it involved the Kermit stuffy I bought at the Center for Puppetry Arts, an old Muppet Babies Kermit stuffy from my childhood, a squeaky Muppet Babies Miss Piggy toy that my sister found in her house, some Muppet picture books that are probably over 35 years old (and not in great condition), and The Muppet Movie. Through all of these activities, our household is in the throes of Muppet Fever, and I love it. M. has been especially obsessed with Muppets Most Wanted, he says because he likes that there are two frogs in it (not counting Robin’s brief cameo). We used an audiobook on a doublet set of the novelizations of the two most recent Muppet movies. He falls asleep to it every night.

Earlier this week, when we had just finished watching Muppets Most Wanted and he said he wanted to watch more Muppets stuff, we decided to try the 2018 Muppet Babies. I had tried it once before and not been able to handle the CG-ness of it, but I will try just about anything for him. It’s actually super cute and has some phenomenal jokes and references for parents.

Since I hadn’t liked this before but was finding it fun now, I decided to try the muppets.. I had been very excited when it was announced, and immediately turned off by the clear references to The Office which is just not for me. I didn’t like the mockumentary style and I was really displeased by the character design for Kermit’s not-Miss Piggy-but-still-a-pig girlfriend. But that was 2015, and this is now! So I started it.

I’ve really been enjoying it. The writing is sharp; the showrunner was one of the writers on Muppet*Vision 3-D, which does a brilliant job of capturing Muppetness. There was an uproar when the show came out about its depiction of relationships, sexuality, and alcohol use as being inappropriate for a “family” property, but one of the earliest Muppet specials was called The Muppet Show: Sex and Violence, so that really doesn’t bother me.

I think the show gets better further in to the run, as the really familiar bits of character come out.

One critic compared it to Studio 60 on the Sunset Strip, but I think it really has a 30 Rock vibe.

One of my favorite things about it is how very much screentime Uncle Deadly gets. He leaped into my top 3 muppets (after Kermit and Piggy) after I saw him in the 2011 movie and, upon researching him, discovered that he is the Phantom of the Muppet Show.

Anyway: I have loved watching this show and am looking forward to the episodes I have remaining. I have been reminded that I have no other OTP that I cling to as fiercely as I cling to Kermit/Piggy.

Finally, if you, too, are obsessed with Muppets, especially if you have seen The Avengers and understand fandom tropes, please go read what is possibly my favorite fanfiction ever written, Avengers: Earth’s Muppetest Heroes.