I promise I’m going to write about what I learned from sewing napkins soon. But first: my personal history with sewing!

I’ve known how to machine sew for a long time (and how to hand sew for even longer). My mom is an accomplished sewist and made a lot of clothes and costumes for my siblings and I as we were growing up. She even made my prom dress. I didn’t sew with her, but I learned a lot of techniques just from being around while she sewed. Mainly how to be a perfectionist about your sewing, which has both benefits and drawbacks. (She never presses seams open or leaves a pinked edge. All her seams are French seams. Gorgeous, but intimidating to a less experienced sewist.)

I didn’t actually use any of what I’d learned from watching her until I took a required tech class as part of my dramatic art major; I chose costuming (this is where W. shakes his fist because in his day you had to do both cost shop AND set but by the time I got there 3 years later, you got to choose). One of the assignments was to design and construct a garment. I made a dress to fit me, lightly inspired by this Drusilla costume from Buffy the Vampire Slayer: 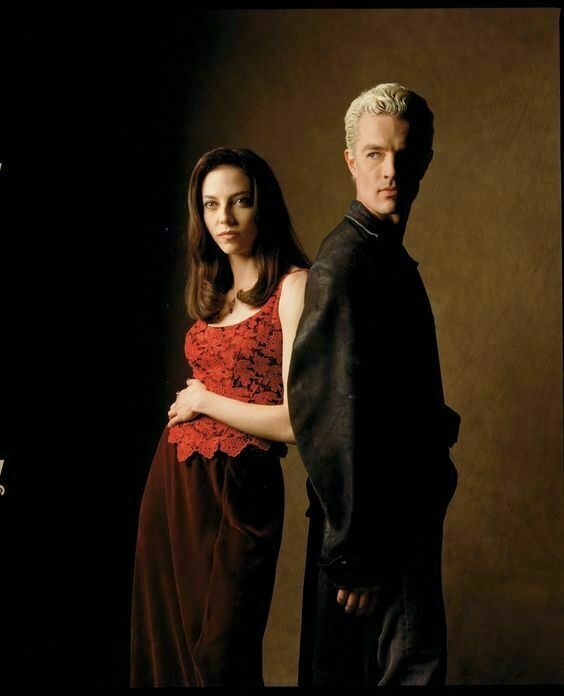 The process involved making a paper pattern on a dressmaker’s dummy (heavily padded in my case), then a muslin, and then finally the real thing. I finished the edges with a zig-zag stitch and pressed the seams open, because that was what I had time for. I wished I’d been up to French seams but it just wasn’t going to happen.

The dress had darts out the wazoo: bust darts at both the sides and bottom of the bodice, back darts, darts at the back of the waist. I made sure it fit me just right and I wouldn’t settle for anything baggy or saggy. (Maybe that’s why I didn’t have time left for French seams.) The director of the costume shop saw it and said I could do haute couture with that level of fitting.

I loved making it. I was very proud of it. I also learned that you really need to include a slit in the skirt if you’re going to make a long sheath dress, or your stride will be limited to teeny tiny steps. (I did not include a slit. In spite of it’s excellent fit, the dress didn’t get a lot of wear because of this.)

I wanted to sew more but I was saving all my money for traveling to *BtVS* fan parties (that’s an account written by a journalist of the first Posting Board Party I went to) so I didn’t grab a machine until my mom noticed one at a yard sale down the street from her. The machine and its cabinet were going for around $70, so I bought them.

I sewed exactly one thing on that machine, a costume for me to wear to go to the movie Troy. (Remember when Legolas and The Hulk were brothers?) It was actually a costume that, if historically accurate, would have been no-sew, but I was afraid a no-sew version would fall off. So I made myself a chiton with some success.

And the next time I used that sewing machine, the needle got stuck in the bobbin. And so I did not use it. I kept moving around with it; I think that machine moved with me five times.

At the North Carolina Maker Faire in, I don’t know, maybe 2014? I sewed a quilt square for a big communal quilt somebody was building there. I loved it. It reminded me that I actually loved sewing, and I wanted to do more. So I promised myself I would.

When I finally got the machine out for the first time recently to try again, after great success winding the bobbin and threading the needle, the same thing happened. I tried cleaning and oiling the machine, but that didn’t fix the problem. I decided to give up on that machine, for which I could not find a manual online and which was lacking many features of modern machines, such as numbering on the thread guides to tell you what order to thread it in.

So I asked for a new machine for my birthday, and I got one!

And I decided to use Craftsy’s Sewing 101 class to help me get back into it, since I hadn’t really sewed in 17 years.

Which is how I ended up making those napkins.

And I’ll tell you what I learned from making them soon, I promise!