If you make a purchase through a link in this post, I may earn a commission. 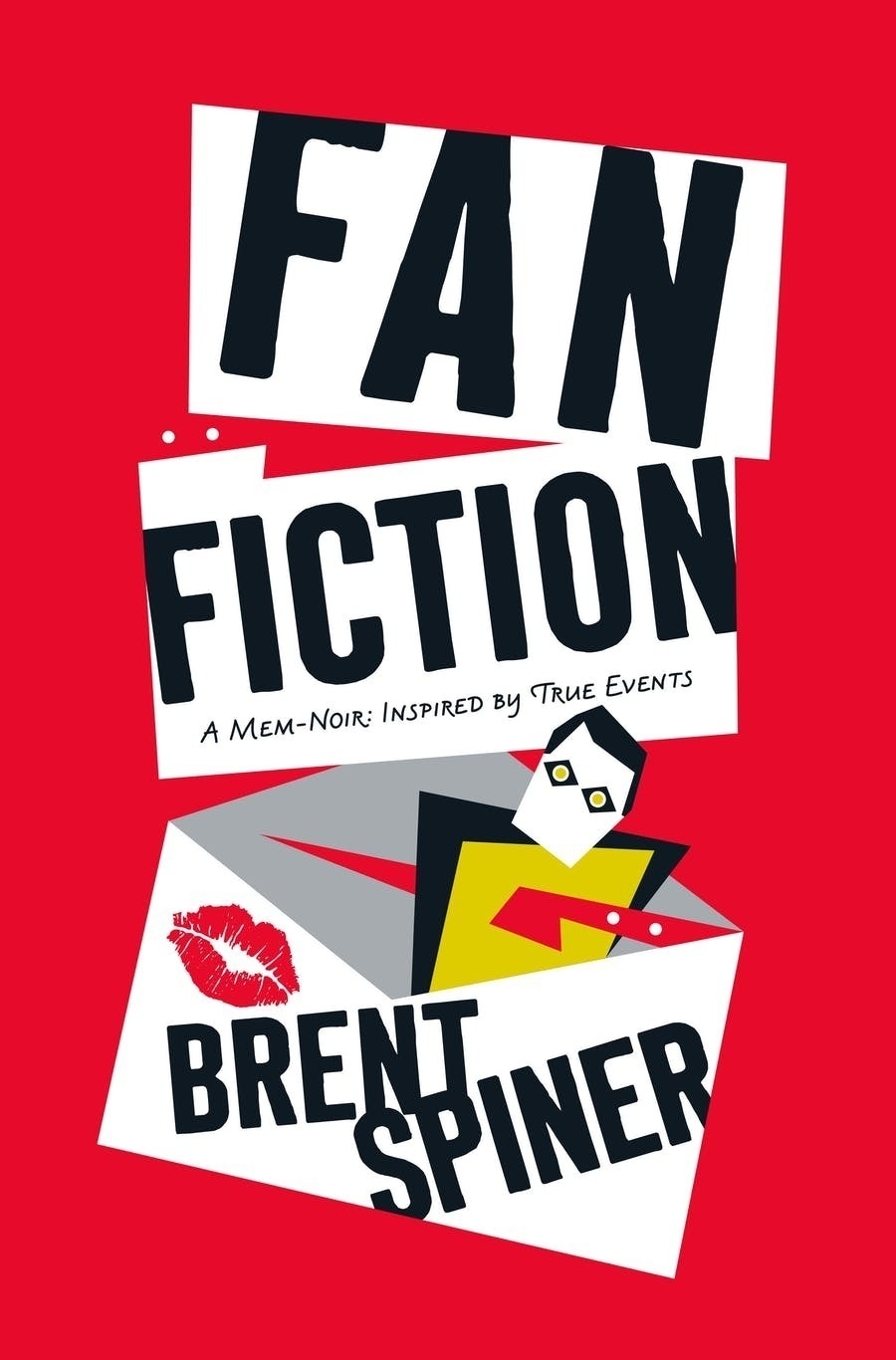 Brent Spiner’s explosive and hilarious novel is a personal look at the slightly askew relationship between a celebrity and his fans. If the Coen Brothers were to make a Star Trek movie, involving the complexity of fan obsession and sci-fi, this noir comedy might just be the one.

Set in 1991, just as Star Trek: The Next Generation has rocketed the cast to global fame, the young and impressionable actor Brent Spiner receives a mysterious package and a series of disturbing letters, that take him on a terrifying and bizarre journey that enlists Paramount Security, the LAPD, and even the FBI in putting a stop to the danger that has his life and career hanging in the balance.

Featuring a cast of characters from Patrick Stewart to Levar Burton to Trek creator Gene Roddenberry, to some completely imagined, this is the fictional autobiography that takes readers into the life of Brent Spiner, and tells an amazing tale about the trappings of celebrity and the fear he has carried with him his entire life.

Fan Fiction is a zany love letter to a world in which we all participate, the phenomenon of “Fandom.”

Let’s get the fanfiction discussion out of the way.

If you are into fanfiction, you probably know that, despite anything the OED may tell you, fans (or fen, as we’re sometimes pluralized) write it as all one word: fanfiction. Spiner’s book is titled Fan Fiction. But there’s a reason, I promise! In spite of Spiner not writing this the same way as fans do, I can fanwank the title! The novel itself, you see, is mostly Fiction, and it’s about not only Brent dealing with the attentions of a scary Fan, but the ways in which Brent is a Fan himself.

There is a point at which Brent tells Patrick Stewart that he feels as if he is a character in a work of fanfiction. At first, I thought, “Whoa, an actor aware of fanfiction in 1991?” but then I remembered that this is Star Trek, one of the first media fandoms and the first fanzine-based media fandom, and that the first issue of a newsletter devoted to Data and Spiner was released in the fall of 1987, well before this book takes place. That newsletter (adorable titled Data Entries) published its first piece of fiction in issue 3, which was published in spring of 1988, again well before this novel takes place. It’s worth noting that the first issue of the newsletter discusses establishing a fan club for Spiner and later issues report that Spiner requested that fans not do this and that the newsletter not include photos of him out of makeup. While the driving force in the novel is a fan who is creepy as can be, there were a lot of active fans of Spiner’s who were careful to respect his privacy. All of this to say, of course by 1991 Brent would be aware of fanfiction, though whether he would have actually read any for Star Trek or anything else is something I don’t know.

This book is a lot of fun. Brent Spiner makes it impossible to know what draws on real life and what’s totally made up, though there are interviews where he clarifies it a bit.

I can’t include exact quotes because I only have an Advanced Reader’s Copy and not a final version, but I can share some of my own notes with you. I think that will illuminate what I love about the book better than a summary can.

There’s a point at which Brent goes to see a detective at the LAPD. This detective offers a lot of assistance regarding Brent’s stalker, but of course he finishes their meeting by telling Brent he has a TNG spec script that involves Data traveling back in time to the 20th century to team up with a character who is clearly a self-insert for the detective. But really, who among us doesn’t have a TNG spec script that features Data collaborating with a self-insert character? When I was in middle school, my best friend and I plotted out the beats of an episode where Data teams up with a middle school-aged flautist to communicate with the Crystalline Entity through music. The middle school-aged flautist was a self-insert for my best friend; Data was guaranteed to be a Data Sue for me if we had actually finished the script.

Spiner portrays himself as a nebbishy, anxious wreck, which completely contradicts the image I have of him in my head as a confident, charismatic, and hilarious performer. It made me feel more aligned with the character Brent, which is nice because as someone who sees myself in Data, there was the risk I would find Brent to be so different from his character as to be not relatable. I too am an apparently confident and charismatic person who is actually an anxious wreck. (Can women be nebbishy? If we can, I am on the inside but not externally.) Because of this, I found Brent super relatable.

We get a glimpse into the glamor of a Hollywood life here when Brent puts in a CD in his car in 1991. How fancy is he? My family didn’t get a car with a CD player in it until probably 2000 or later. We bought one with a tape deck in 1993.

Spiner references his comedy influences in the book frequently; at first, I didn’t think of him as a comedic performer, in spite fo thinking of him as a funny person, but remembering that he was part of a panel on humor in Star Trek as part of First Contact Day 2021 reminded me that this is, in fact, a huge part of his work. Spiner’s comedy chops shine through in the book, when he has Brent drop jokes in a classic comedic structure. Again, I can’t tell you the exact quotes, but there are a lot of places where my annotations say things like “Fucking hilarious” and “Brent Spiner is a goddamn delight.”

Spiner confirms what I already knew (and used for my Data cosplay at my dissertation defense): Data is not white. He is gold. I liked that he confirmed this and mentioned it pretty frequently.

Spiner portrays Gene Roddenberry and Majel Barrett-Roddenberry as freaking adorable. I don’t know what they were really like, and I know that Majel wasn’t the alpha and omega of Gene’s attractions and romantic/sexual relationships, but DAMN, so cute.

Spiner’s portrayal of his TNG classmates is, according to his SyFy interview, exaggerated; it’s also delightful. Levar Burton is the most enlightened hippie in hippietown and Patrick Stewart is 100% So Very RSC.

What I wanted more of:

There is a lot going on in this book, in spite of it focusing strongly on one storyline: Brent dealing with the mysterious fan who is stalking him and seems to believe she is his daughter from the Star Trek: The Next Generation episode “The Offspring” (almost there in my rewatch!), Lal. I wish we’d gotten to spend a little bit more time with any of it. It’s a fast and fun read but it wouldn’t have been hurt by I having more time on set, more time dealing with the mystery, more time with Brent handling his complicated relationship with FBI Agent Cindy Lou and her twin, private security guard Candy Lou.

What I need to warn you about:

Spiner’s writing voice here is sparse. I think this is because Spiner is putting on a Chandleresque voice; reading the Google Books preview for The Big Sleep confirmed this for me. I rarely read hard-boiled detective fiction or noir; I’m more of a Victorian/cozy kind of gal. Because of this, the voice took me by surprise. If you’re used to that kind of writing, I think you’ll go, “Yep.” If not, know that it’s an intentional style.

While Spiner imitates the voice of a hard-boiled detective here and “mem-noir” is a delightful neologism to describe what he’s written, this has a more optimistic vibe than is typical of noir or hard-boiled detective stories. There’s a mystery, the book is set in LA, and Cindy Lou and Candy Lou could be credibly called dames, but that’s where the similarities end.

There are a couple of anachronisms that I wonder if they’ll be in the finished book. There’s a point at which Spiner uses the word “besties,” which seems to have first appeared in 1991. So it’s possible it would be used in the context of this story, but it would be very cutting edge. There’s also a character described in the epilogue as having been taking online classes for years, and I can’t tell if the epilogue is supposed to be from the perspective of Spiner-now, as the prologue clearly is, or Brent-then. So that might be an anachronism or it might not, I can’t tell.

Some people have criticized Spiner’s portrayal of women in the book, especially the twins Cindy Lou and Candy Lou, as being too limited and focused on them as sexual objecsts. It’s a fair critique, but it didn’t bother me.

Final word: Fans of Star Trek: The Next Generation should definitely check this out. Noir readers might enjoy it too; Spiner does a good job of explaining things about the show that non-fans might otherwise confusing.