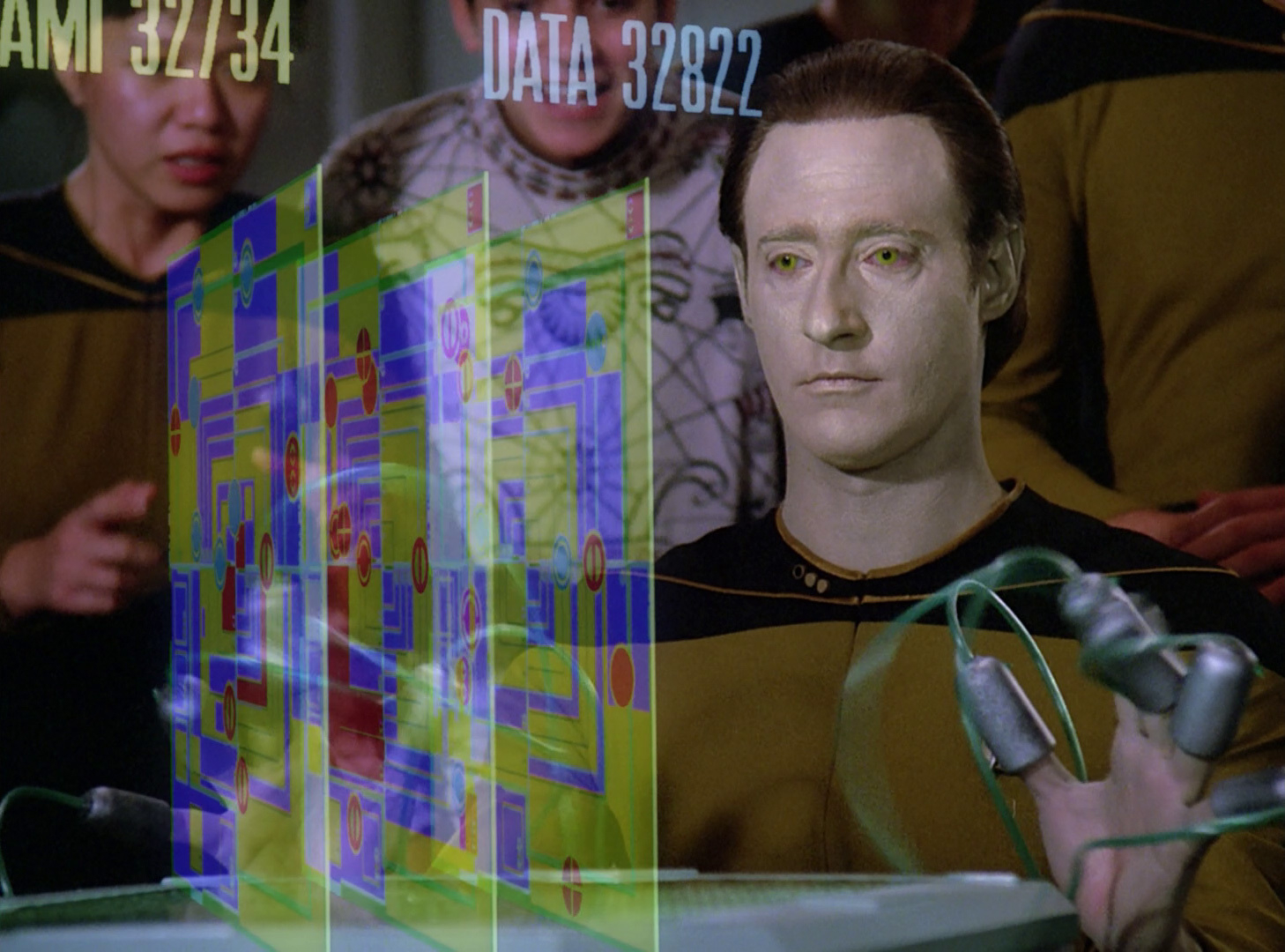 I’ve been in the middle of a Star Trek: The Next Generation rewatch for months, maybe even more than a year. Maybe since before the pandemic started, I don’t remember. I often will fall asleep to a TNG episode. I do this with the same episode over and over until I actually watch it all the way through while I’m awake.

Back in May, just over a month out from my dissertation defense and with no plan for the future, the episode I slept through over and over again was “Peak Performance.” It’s one of my favorite episodes, for many reasons, and one reason is a B story focusing on Data. (Surprise!)

The A story is that a strategist named Kolrami has come aboard the Enterprise to evaluate the crew’s performance in a combat exercise. Kolrami is a jerk and has real problems with Commander Riker, suggesting that Riker’s jovial attitude is not compatible with strong leadership.

Kolrami is also super arrogant. He comes from a species called the Zakdorn, well known for producing the galaxy’s best strategists. He prides himself on his strategy and uses it for games as well as combat exercises; he is a grandmaster of a game called Stratagema. Riker challenges Kolrami to a game of Stratagema and loses after only a few moves. Thinking that with his fancy positronic brain Data might actually be able to beat Kolrami, Dr. Pulaski eggs Data on to play and eventually misleads Kolrami into believing Data has challenged him. Data agrees to the challenge, in spite of not initiating it.

Kolrami and Data play Stratagema and it lasts longer than the game with Riker did, but Data still loses. Then this exchange happens:

Pulaski: How can you lose? You’re supposed to be infallible.

Data: Obviously, I am not.

It seems like a simple and innocuous response, but Data goes on to remove himself from bridge duty, believing that his loss at stratagema indicates a defect in himself:

I have proven to be vulnerable. At the present time, my deduction should be treated with skepticism.

I am concerned about giving the captain unsound advice.

This has indicated that I am damaged in some fashion. I must find the malfunction.

I heard the exchange above and these lines from Data and felt a deep resonance in my heart. Isn’t this how so many people feel, all the time? Isn’t this especially how scholars feel? Especially if you are an overachiever, you may make it all the way to a PhD program and only know what it is to excel in everything, and then meet a challenge that you can’t surmount.

You might be pursuing a tenure-track job, have done all the things you’re supposed to do, and still not get hired. Maybe you have tons of publications, brilliant teaching evaluations, a robust record of service, and did important dissertation research. And it doesn’t matter.

Data explains to Picard why he has removed himself from the bridge and what prompted him to do so. Picard replies:

…it is possible to commit no mistakes and still lose. That is not a weakness. That is life.

Um, excuse me Captain, just a moment, I got something in each eye and it has caused them to water profusely and also has made sobs wrack my body, hold on…

In the end, Data challenges Kolrami to a rematch. We see them play, Kolrami moving more quickly and becoming more agitated by the moment, as Data plays slowly and maintains a calm expression. Kolrami suspends the game, yells “This is not a rematch. You have made a mockery of me!” and storms out of the room.

As Data’s colleagues come to congratulate Data on his victory, he points out that he didn’t win, though no game of Strategema has ever gone to as high a score as this one has. Data explains that Kolrami was playing for a win and assumed that was Data’s goal as well, but Data had in fact chosen his own goal: a draw. He let many opportunities that would have supported a win pass him by in order to maintain a balance that would let him challenge Kolrami indefinitely.

Is this a perspective that can be useful for anyone dealing with impostor syndrome, and especially PhDs moving away from the tenure track? I think so. The “victory condition” for a PhD is assumed to be a tenure track job, but I went in with the intention of learning about qualitative methods. Now, I write about qualitative research and am pursuing other writing and consulting opportunities. It’s not success by the usual metric, but it’s a path with which I am happy. And it’s a path where no one tells me to wait for tenure before I have a kid (whoops did it during the PhD!), do public scholarship, or have opinions. And thank goodness, because that’s a long wait for a train don’t come.